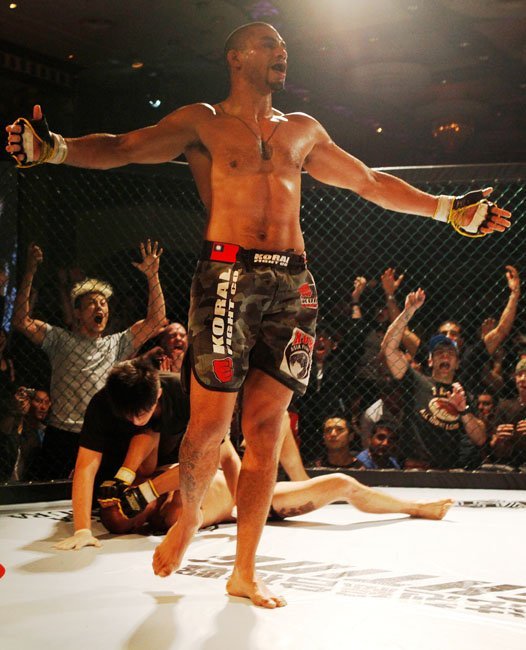 Demitri Telfair is the founder and head coach of the Bear’s Den BJJ & MMA in Taichung City, Taiwan.

Demitri began his mixed martial arts journey practicing Tae Kwon Do and Wing Chun Kung-Fu in Canada over 20 years ago before moving to Taiwan. Since then, he has competed in MMA, Muay Thai, Boxing, Kick-boxing, Brazilian Jiu-Jitsu, grappling, Judo, and Sambo.

Demitri is also the Vice President of referees for CTMMAA, with over 100 fights refereed and judged. He assists and presents at MMA referee seminars educating the young talents of Taiwan. For overseas referee experience, he has worked for One FC in China and Legends FC in Macau.

This video is a highlight video featuring some of Demitri’s Muay Thai and MMA fights. These fights were from various competitions throughout Taiwan between 2008-2011.

A Grappling Highlight compilation of Demitri Telfair as a blue and purple belt between 2006-2011.

These matches took place at various competitions throughout Asia including:

Q&A With the Coach

Why did you start training?

I started training in martial arts because I grew up in an area where I had to learn to protect myself at a young age. As a young teenager, I got into a lot of street fights and decided that if I wanted to improve my fighting skills, I needed to train in the proper environment with a great coach. Shortly afterwards, I joined my best friend’s Tae Kwon Do Academy at age 19.

What do you love most about martial arts?

Martial arts require a fluid unison between the mind and the body. I enjoy the mental aspect as well as the physical. I believe fighting is one of the purest forms to display your art. I enjoy the bonding and camaraderie the martial arts offer. I embrace the hard work and love learning new skills, techniques, and ways to strengthen ourselves through martial arts.

When did you begin teaching MMA and jiu-jitsu?

I began coaching in 2009, in Taipei, at Taiwan Brazilian Jiu-Jitsu as a blue belt. At that time, we didn’t have any instructors ranked past blue. In 2010, I opened and instructed the professional MMA classes at TWBJJ, in which we had over 7 pro fighters on the team.

What do you try to focus on when coaching?

When coaching, I’m always striving to help each individual accomplish their goals. I believe that it’s important to recognize the difference between the students who train casually for fun and exercise, versus those who want to have themselves pushed a bit harder and even compete. My goal is for everyone to sweat and get a good workout in, as well as to obtain at least one new technique for each class.

What are some future goals you have for MMA/BJJ?

One of my future goals for MMA is to be a referee for a UFC event. As for Jiu-Jitsu, I plan to compete in the Masters Worlds in Las Vegas within the next two years. Since I’m uncertain if I will fight MMA again in the future, I am solely focused on coaching and training the new generation of athletes. I will continue to contribute and pave the road for the growth and success of MMA in Taiwan.

We can answer your questions in English or Chinese.
我們可以用英文或中文回答您。